I’ve been doing pretty well on Weight Watchers so far. Last night, I received my 4 month charm. If you’re not familiar with WW, as you progress in the program, you earn charms that serve as reminders about how well you’ve done. They’re great motivators and they work as “anchors” to pull you back to the place where you felt some success. They’re there to help you get your head on straight whenever you need that little reminder. Sort of like a magical talisman. I LIKE THAT.

What I don’t like is that they’re on a strangely-shaped “keychain” of sorts that prohibits me from wearing it or keeping it close by where I can touch it whenever I’m craving a Big Mac. 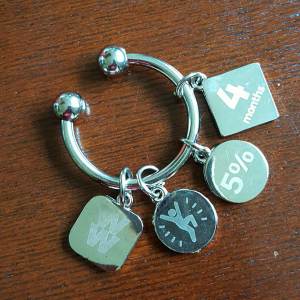 Speaking of Big Macs. Sometimes, I really need a Big Mac. Seriously. I’m not joking here. Do you hike? The best post-hike food is something with carbs and protein and a hamburger is a perfect post-hike meal.

I’ve been craving a post-hike hamburger for several days now. I crave them after I hike, after I walk, and just because I like them! I did a last minute 3.5 mile walk the other day and I was just itching to get my hands wrapped around two all beef patties, special sauce, lettuce, cheese, pickles, and onions on a sesame seed bun. Instead, I went home, stir fried some veggies and made a quick teriyaki ham. It was good but it wasn’t what I wanted.

I think the reason that I’ve been somewhat successful on WW this time around is that I told myself I would eat whatever I wanted, whenever I wanted. I believe because I’ve had this mentality, I have lost every week of the 16 weeks I’ve been on plan. There have been weeks when I’ve only dropped .1 pound, but I count it as a loss and I’m happy with it. I know I will eventually hit a plateau. I know there will be weeks when I gain weight but I will deal with that eventuality when I get there.

So, last night, after my WW meeting, I drove to McD’s and ordered my Big Mac. I took the piece of bread out of the middle (something I would not have done prior to joining WW) and ate. it. up. I want you to know that I enjoyed every, damned minute of it, too. One of the things WW talks about at the meetings is the idea that “not-so-healthy” foods are often not as tasty after the first few bites. The mantra is “nothing is as good as the first bite” and often, I have found that to be true, but not last night. That Big Mac was good from the first bite to the last.

And today, as I reflect on the Big Mac and my WW plan, I think that perhaps my WW charms shouldn’t just be “anchors” to my successes, but perhaps, to my failures as well. If this is to be a life-long journey, shouldn’t I also be reminded that there are times when poor choices may win out? And what if that poor choice is the impetus to making better choices for the next meal, and the next, and so on and so forth?

I should be able to look at my charms and revel in my successes and my failures. I should be able to appreciate the idea that last night’s Big Mac will lead me to making much healthier choices this week. That every now and then, we need to eat that bad food, mark our choices down, and move onward and upward. And, so I shall.

I enjoy reading and have blogged in the past about travel and books. My latest blog is a vanity blog. I write about whatever comes to mind, specifically, things I think I need in life. Hope you enjoy!

Do You Really Care About What I Want to Read?